Built for any environment

Prevents water accumulation at the leads

Handles twice the load as a typical washdown with
25mm bearings, 47% larger than most competitors

Built to last in the harshest environments

Outperforms any other feather picker motor on the market, and one motor
change can cost over $15,000 in downtime*

With a comprehensive warranty

Even covers failures from water intrusion

*Assumes $500/minute in downtime and 30 minutes for a motor change.

Built for the toughest environments

Bluffton Motor Works has created a unique testing environment, which lab engineers have dubbed the ‘torture chamber’, to replicate worst case scenarios for its washdown motors.

Bluffton Motor works has also created a test in which a HydroDuty Motor was submerged into a 55 gallon drum. The motor runs for three hours, then shuts down for thirty minutes. The cycle is repeated, 24 hours a day 7 days a week.

The Reason for the Test

The maintenance manager at a poultry processing plant had experienced motor failure repeatedly, because production lines are washed down several times a day with high pressure hoses. He asked Bluffton Motor Works to prove to him that their washdown motor really could survive any environment.

Bluffton Motor Works warrants that its products will be free from defect in workmanship and material at the time of shipment and will conform to the specifications published or agreed to between purchaser and Bluffton Motor Works for a period of one (1) year from date of installation but in no event beyond two (2) years from date of manufacture. Specific to HydroDuty and Picker-Plus motors, this warranty will also cover all water-related motor failures resulting from typical sanitary washdown procedures for the aforementioned period of time.

All warranty claims should be submitted through your authorized distributor. Motors requiring evaluation or analysis may be shipped freight prepaid to Bluffton Motor Works. Prior written authorization from Bluffton Motor Works is required before shipment.

The warranty stated above does not apply to products that have been subject to misuse (including use in a manner inconsistent with the design of the product), abuse, neglect, accident or improper installation (including the failure to use the waterproof splice kit provided with the motor) or maintenance, or to products that have been altered or repaired by anyone other than Bluffton Motor Works or its authorized representative.

In freezers, HydroDuty runs 6 months to a year;
former motor lasted 2 to 7 days

On pumps, HydroDuty runs 9 months to a year;
former motor lasted 1 to 2 weeks

Tim Gest is plant engineer at a food processing plant in Texas. Mr. Gest is responsible for the overall operations of the plant.

HydroDuty Motors Used for the Most Severe Applications
“We have close to 30 HydroDuty motors in operation right now. We started using the HydroDuty motor about four years ago. I had seen a demonstration of this motor, and we started considering them, primarily for harsh applications. For something like freezers, where the temperature might be -30° F during the day and 180° F at night, because of the sanitation procedures, a regular Baldor motor would only last about 2 days because of the condensation issues. We decided to try the HydroDuty motor, and we went from a motor lasting two to seven days to lasting six months to a year with the HydroDuty motors. That might not sound like a long time, but when you consider the extreme environment that these motors are running in, any other motor would last less than a month.

“We use the 5 HP HydroDuty motor on our pumps. They pump our product and transfer them from the cooking process to the packaging process, moving the products through our system. The piping size is 3”. The Baldor motors were burning up every week or two on the pump applications. Water and condensation were getting in them, and we would have to change them often. We had about 15 pump set-ups and had to change at least one motor a day. We are getting about nine months to a year out of the HydroDuty motors. We have been real happy with their performance.

“We are thoroughly convinced and impressed that the HydroDuty motor is the best motor out there. I’d be hard pressed to have someone come in here and convince me to change and try something else.”

Installation Is Important
“The HydroDuty motor comes with a little shrink wrap kit, and you need to make all of your connections inside the box on the motor. You have to slide the little shrink tubes over them with these gurney connections and crimp them. Then, you slide the shrink tube over the connections and heat it up to seal it to the wires. If you install them right and connect them right, you can actually run the motor underwater if you had to. Bluffton requires the motor to be installed correctly for warranty purposes.

“You install them, you install them properly, and you walk away from them. If everything were that way, you wouldn’t need as many maintenance guys. It’s just one less thing to worry about.”

Even in feather picking, a very harsh environment

Wayne Farms is the sixth largest vertically integrated poultry producer in the U.S. They own and operate ten facilities, producing 1.8 billion pounds of poultry annually. Products are sold primarily to restaurants and deli counters at supermarkets.

“The HydroDuty motors are used primarily in our feather picking environment,” says Jerry Bevel, maintenance manager at Wayne Farms’ Albertville, AL facility where plant processes include poultry slaughter, fully cooked, and further processing, such as marinades. “They have approximately 10 times the life of a regular motor. I like the HydroDuty motors, because they stand up to a harsh environment and hold up well. The environment we use them in is wet and hot. We use 8,000 gallons of water a day, so these motors are constantly wet.”

Cost Savings Come from Long Motor Life
“The cost savings come from the life of the motor. Because it lasts so long, you save money. These motors are lasting ten times longer than other brands we have used. You really don’t have to buy that many each year when they last that long.  I know of two that we had to replace—one was three years old, and the other was four.

“We’ve been using them for 6 years. We have about 25 or 30 HydroDuty motors throughout the facility, and I have recommended them to all my other counterparts in the company.”

HydroDuty Motors throughout the Facility
“Feather picking is a really harsh environment. The motor powers discs, which are filled with rubber figures and spin at 1000 rpm. The chickens run through a set of plates, and the rubber fingers de-feather the bird. Each reel runs at a 1000 rpm; they are all belt driven. There are approximately 16 per bank driven by one motor and a serpentine belt.

“We also use the HydroDuty motors for various conveyors and line drive motors—anywhere the application is a match for the motor’s capabilities. There’s one on the full box conveyor—it’s a finished product conveyor.”

“We first heard of the HydroDuty motors from a corporate email telling about plant trials with HydroDuty motors. We ordered a couple and put them on the cook side and had great success with them. They lasted many times longer than the other motors we were using.

“After a visit to our plant by Bluffton’s reps we began using a low temperature version on a freezer application, again with outstanding results. It has worked so well in this application the equipment manufacturer called asking about the performance of the motors on their equipment.

“Our purchasing manager began buying them for the kill side. My only complaint is that they don’t come in single phase.”

HydroDuty Stands by Commitment to Quality

“Anyone who has dealt with the maintenance challenges that come with keeping electric motors operating in a washdown environment knows that solutions are hard to come by. During my 25+ years in industrial maintenance, I have heard countless claims/promises from manufacturers/salespersons regarding their motors that are “washdown rated”. Unfortunately the sanitation practices in the plants that I’ve dealt with must have been more intense than the testing criteria for those motors, as none of them performed up to expectations.”

“As a result, when I was first contacted about Bluffton Motor Works’ HydroDuty motors and convinced to try one, I was still very skeptical. There is no luck involved with a motor holding up to direct contact from 900 psi water day to day, during a sanitation shift in a food processing plant. It takes a quality product, designed to withstand the environment, which the Bluffton Motor Works’ motors have proven themselves to be.” 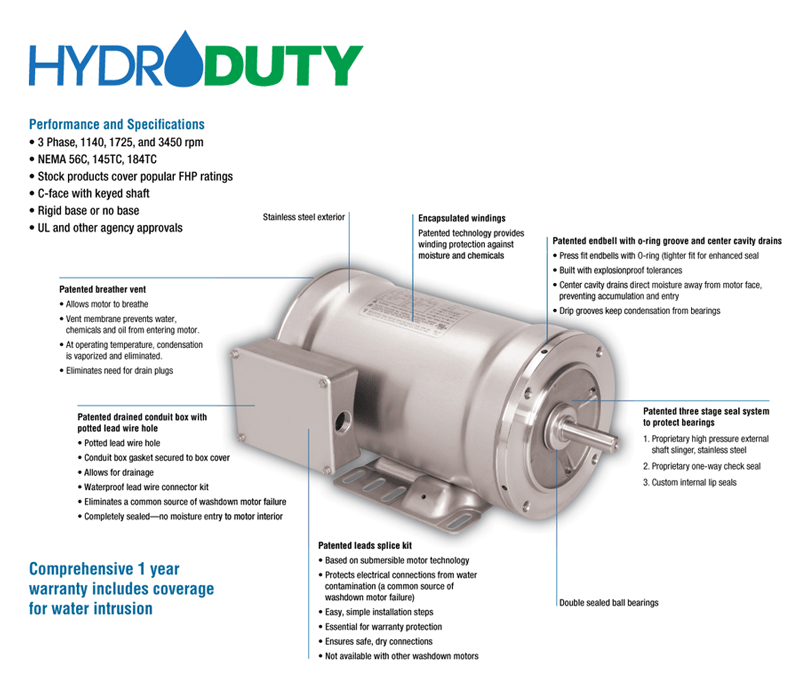 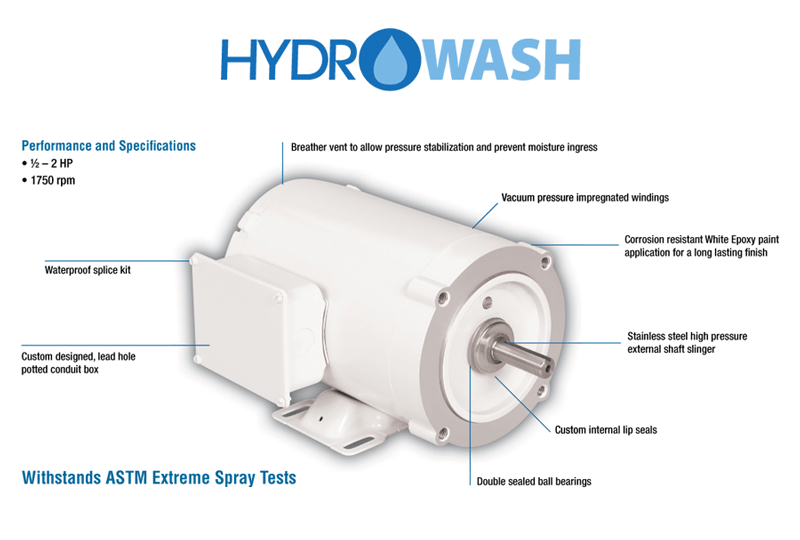 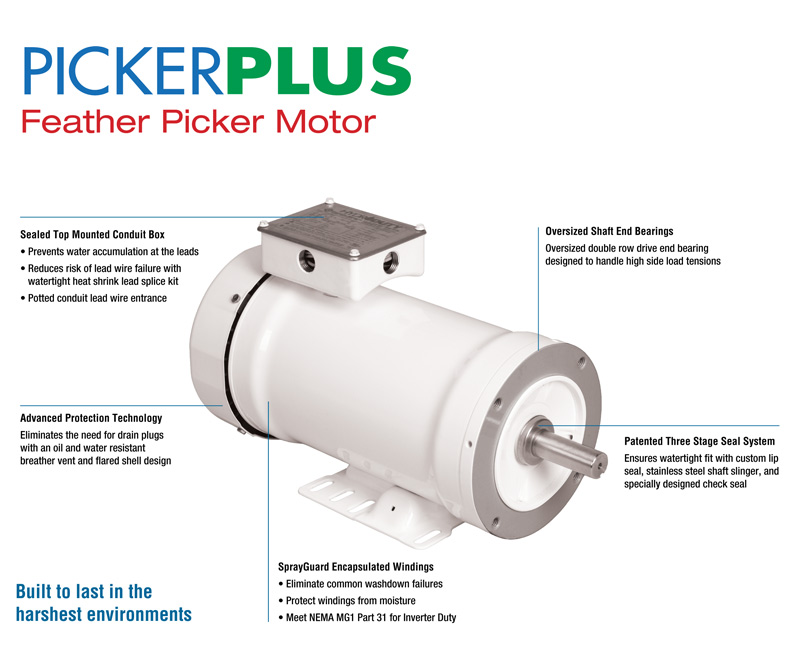 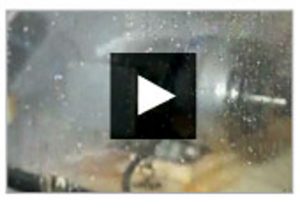